When men write about sexism they get praised to high heavens for it, although women have been talking about it, writing about it, making art about it, and living it for so fucking long. Initially I struggled to write about sexism because I felt that maybe it’s not mine to write. I want to contribute to the conversation in a way that isn’t colonizing. As men, we can take responsibility for what is ours: the many ways we participate in and continue to perpetuate sexism. Everything I say from here out, I’ve learned from listening to women and reading women’s works.

I’m a 36-year-old black dude (who has the privilege of my gender identifying with the social constructions of gender prescribed to my birth sex). I grew up with and currently talk to a lot of other black dudes with the same privilege. What has been constant throughout our lives is this harmful idea that certain black men aren’t “real men.” They’re called: bitch niggas, pussy-ass niggas, hoe-ass niggas, etc. The “woke” black men say: the emasculation or feminization of the black man. This is not exclusive to black men because white men and every other group of men do the same shit, but right now I’m specifically talking about it in terms of blackness.

Here’s the thing—the idea of emasculation is misogynistic. This term—emasculation—is meant as a demotion, a decrease in value and status to a woman. Lesser = feminine. Emasculate and feminize are also coded terms for softness, tenderness, weakness. These traits are not, and should not be gender-specific. Even Jay-Z has these lyrics (often repeated as gospel): “Males shouldn’t be jealous, that’s a female trait.” That’s false—jealousy is a human trait, but because women aren’t valued as much as men, it’s acceptable to broadly apply an undesired trait to women. I can’t think of any undesired traits that are broadly applied to men. One can also think of plenty of sexist jokes about women, but not men. In the same way that most people can rattle off racist jokes for Black, Chinese, Mexican, etc. people, but can’t think of one racist joke for white people. (Blond jokes don’t count because they’re really about women, not whiteness. Redneck jokes are really about poverty.) The accepted oppression is built into the language.

We know whiteness does not want us, and has not been kind, soft, or tender to us, which has led to real life political, social, and economic consequences. And at the degrading expense of women, we are doing the same when we tell black men that they aren’t real black men if they are “soft” or “feminine.”

I’ve found a necessary comfort in blackness and its varied expression, and it’s allowed me to persist and resist in this world. However, a lot of black men are pushed away from blackness because there is a perception that they’ve been emasculated or feminized, whether it’s through their choice of clothing, mannerisms, or other expressions. Blackness and masculinity (if it’s important to you) should be expanded to include your rompers, skinny jeans, crop tops, cross-dressing, and sass. It should include your queerness, tenderness, and softness. If you are a soft dude, I appreciate and encourage your softness. I want to be softer.

We also know damn well what the societal devaluing of people through linguistic structures allow to happen and are reflecting. They allow and reflect real violence.

You really Jewed that up.
Sand niggers.
That movie was so gay.
Injuns.
Blast the Jap off the map.
Wet backs.
A family of crack babies and welfare queens.

Most people generally agree these sayings are wrong–they’re “slurs.” But it’s still common to call a man a bitch-pussy-soft if you think they’re acting like a woman. Men have to do a lot of everyday hard work to un-learn these automatic sexist constructions. We can start by not placing a gender value on traits that all humans share. We are just as “emotional” as women, but we’re taught not to acknowledge those emotions. I’ve talked with other men about this before and have been told, “Chill out man, I’m not sexist, it’s just a saying.”

But it’s not as innocent as “just a saying.” These sayings allow and reflect real violence. They reflect the reasons why people think 100 women are lying about being sexually assaulted by Bill Cosby. They reflect why people somehow think the Kardashian sisters are ruining men’s music and basketball careers, but no wives or girlfriends are given credit when the men have great careers. They reflect the reasons why men think it’s okay to threaten violence on dating sites.

“I’ve been back on OkCupid for less than 5 minutes and have already been told I should be thrown under a bus. *~pAtRiArChY~*”

A dude responded: “Yep. Collectively, we’re the worst.”Alex: “Y’all should do something about it.”

“No like I’m seriously asking you to please do something about it. Please.”

Another dude: “I wish I could defend my gender. I shall drink instead.”

Alex: “OR YOU COULD DO SOMETHING ABOUT IT.”

The conversation goes on in a similar way until Alex finally says, “If you want to help, take some of this rage off of my shoulders, and put it in on yourselves.”

A note about the title: I understand there will be varied responses to the title of this essay. Some may be offended, or consider it cheap. However, in the context of this essay and social issue, the title is important. My choice was twofold: The title serves as a good entry point into the essay for people who use those constructions, who may not otherwise read an essay like this. Secondly, by using the phrase “In Support of Softness” I wanted to immediately undercut the saying “Bitch Niggas” in order to have the title mimic the essay. I am totally open to further questions, insights, and discussion about my title choice. You can contact me directly.

This article was first published in Proximity Magazine 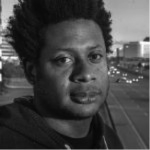 One thought on “Bitch Niggas: In Support of Softness”