In spite of the water
and grain I cook the doll of my husband
breakfast in the morning.

To what branch of endurance do we belong?
I dislike most children. I’m suspicious of pronouns.

The void surprised me with its warm embrace;
before, I shivered at your doorstep. We couldn’t live
here. We lived here. That was the end,

or the beginning of my own
persistence. I told you I never liked
what years did to time, how they mark what’s left of it.

It’s as if breath’s potential as a unit
had not been considered. When we stop
sharing breath, do you know

what we’ll leave behind?
We’re not alone. Then we were.

What confidence! What valor! What skin!
The predictable desires stand requisite. I left

my tongue beside your pillow
on purpose, I needed you

to see me again, though if you’re too
busy I’d hardly mind not speaking!
Your convenience is mine. O—how adorable

my innocence—when you said ours, I thought
time. It’s been hard to prove desperation as something other
than what tarnishes

the resistant act that living is. What is it
(about greed) that stifles me now? I’d kill to live.

All brutality begins with wanting,
the way pride begets downfall.
Is it possible to remove a light
from its source? Of course not,
but we want to be amused. I swallowed
the purple blaze of my envy just
to dance aglow among my brothers.
I wish to be the most impossible
kind of daughter, like Jesus
but prettier.

I didn’t want to be a disappointment
so I licked the cock of the man who said
he adored me. In the morning, I left

like a faithless woman might exit the church
of a town she were simply passing through,
someone who would only be there

Tell me you felt the same.

That when we lounged in bed and
you talked about your parents you were telling
the truth, I trusted you, we were spilling all
over each other, oh no, did I misunderstand

the dark, did I have reason
to lie? I told you everything.
What do you remember? What
(of mine) do you now have?

This is how I want to be fucked: like forgiveness
had already been given and more
importantly, forgotten, like tomorrow was a distant
eon we could contort into irrelevance. For now,

mine, your crotch, trusted like a service above my teeth.

I’ve acquired the cold luxury of indifference.
Everything in the world is around me

and wrong. I wade in it.
Even the lake

beside which I sit
was dug entirely by men

for the pleasure of men.

(Hold me, holy me
let me rest my outstretched hand.)

I’m too lonely to walk. I’m concerned
with the shadow my partner’s become.
The dishonest pronoun we

sits. What dull thing can I say now about death?
There is too much light here. I’ve been alive
forever. I can be what guides you at the end. 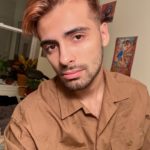 Bailey Cohen-Vera is the Assistant Editor for Borderlands: Texas Poetry Review. A poet, essayist, and book reviewer, his work has appeared or is forthcoming in publications such as The Iowa Review, Southern Indiana Review, Waxwing, Grist, Poetry Northwest, The Spectacle, and Cherry Tree, and elsewhere. Bailey is an MFA candidate in Poetry at NYU, where he serves as a Wiley Birkhofer Fellow, writing obsessively about bananas. His website is baileycohenpoetry.weebly.com.

One thought on “A Poem by Bailey Cohen-Vera”