it isn’t far from here. a train runs through it now.

need transforms the body child
did you know the bones abandon
their stores to give calcium
to a fetus while the flesh wall parent wanes.

this is how we need to survive. by giving until our teeth hurt.

a length of writing directed her the number of miles to the fence.
the animal could not read she knew it by the smell.

insects she’d outrun before
made gentle homes in static fur.
birds too polite to scavenge sang songs of songs.
the animal’s partly quilted legs did not yet shake.

a passing rabbit kicked the fence.
the waiting animal timed her breath
to the metal’s implied music.

all of it still afternoon.
o small child.
the birds guessed the circled clouds into shape.

a scant thousand insects later and the sun gave up the ghost.
the animal not a gazelle lowered her head.
a crescent appears.
a wind makes and umakes its ribbons in her stiff uplifted ears.
a man touches the fence behind her.

somewhere in the telling a small child falls asleep and she is grateful.
you don’t need to know this let’s talk when you’re older.
the moon is artery ugly in its loyalty to the sweat of this planet.

one upon a time there was a half-fluffed animal
stuffing wads of wet green paper
in the walls’
deep cuts
to keep
anything new from bleeding. 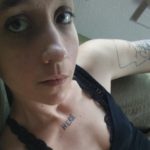 Jessica Lawson (she/her/hers) is a Denver-based writer, teacher, and activist. Her debut book of poetry, Gash Atlas (forthcoming 2021), was selected by judge Erica Hunt for the Kore Press Institute Poetry Prize, and her chapbook Rot Contracts appeared summer 2020 (Trouble Department). A Pushcart-nominated poet, her writing has appeared in The Rumpus; Entropy; Dreginald; Yes, Poetry; The Wanderer; Cosmonauts Avenue; and elsewhere. She is currently at work on her second book project, a portrait of bodily vulnerability at the intersection of poverty, sex, and trauma.

One thought on “Two Poems by Jessica Lawson”