I can’t stop thinking about this .gif I saw
on Tumblr a few days ago: Jake Bass
licking some anonymous man’s penis and

and I’m pretty quiet, even when I don’t
want to be. I’ve been working on projecting
but like everything that takes time,

it’s taking more than it should.
That night we’d gone to Rally’s
for the first time in a long time, just

to talk, and I got the burger that’s got the fries
on it, and it was better than I’d remembered
which makes me kind of sad

when I can’t even buy a bag of spinach
for that price. I’ve been thinking
about that burger for about as long

as I’ve been thinking about Jake’s .gif,
which makes me wonder about meat
and if I’m a terrible person. Mostly

I think I’m all right, even if I’m sitting here—
now—watching that .gif on its infinite loop
with pieces of another burger in my mouth. 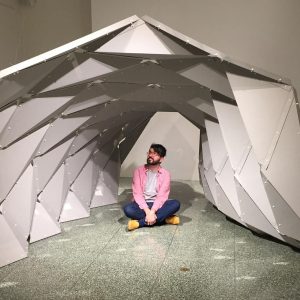 Doug Paul Case lives in Bloomington, where he recently received his MFA from Indiana University. He is the author of the 2015 chapbooks Something to Hide My Face In (Seven Kitchens) and College Town (Porkbelly Press). His poems have appeared in Salt Hill, Hobart, Washington Square, and Voicemail Poems.

One thought on “Real Talk”